Design and Construction of the Eggleston Anniversary Orchard 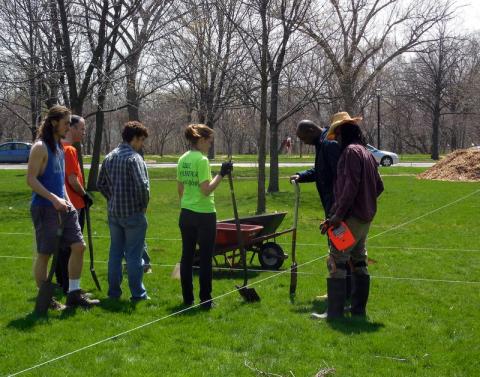 An orchard was designed and constructed in Eggleston Park (McCormick Blvd & Bridge Street, Evanston, Illinois, 60201) as joint project of the Northwestern University Brady Scholars (Brady Scholars) and the New Leaf Urban Garden (NLUG), with support from Edible Evanston (EE) and the City of Evanston (City) Parks and Recreation Department (Parks Department). This is the first orchard in an Evanston City Park. The new orchard, constructed in May and June 2013, includes nearly 50 fruit and nut trees and nearly 30 raspberry bushes.

The focus of the Brady Scholars was to enhance social outreach and jobs in underserved areas of the city and the connection to NLUG through the Boocoo Education Center was a natural connection to fulfill their mission. NLUG will provide maintenance and harvest the produce.

This report summarizes the design and construction of the Eggleston Orchard and memorializes details on plant selection, expected growth patterns, costs of construction and maintenance requirements. Hopefully the lessons learned from these initial activities can educate and inform future activities.

The current orchard was designed and constructed in two phases as funds and volunteers were available to help. Additional phases are being considered by the next Brady Scholars class, NLUG and/or Edible Evanston.

One intent for the creation of the Eggleston Orchard was to provide educational opportunities as well as local research as to what will work well in a City Park. Fruit trees need full sun, and a sunny area of Eggleston Park was designated for this phase. It is estimated that the trees will receive at least six, and up to nine, hours of direct sun a day. Dwarf Trees with a mature height of 8 to 12 feet tall were chosen so that harvesting could be done from the ground or from low step ladders. The site selected is visible from a main road, but not in a high foot traffic area of the park. The site is not fenced.

A grid pattern for spacing was selected based on the mature size of trees and the need for cross pollination among different varieties. An 8 to 10-foot grid is the primary spacing pattern (8 feet for hazelnuts; 10 feet for most of the pears, Asian pears, apples and peaches). The entire area between trees is covered with 3 to 6-inches of wood chips to minimize mowing costs and accidental damage to the trees. Figure 1 shows the site area and tree locations.

An all-organic orchard was considered to be the best approach from environmental and harvesting standpoints and also because of the proximity of a children’s playground. Consequently no spraying (or very limited spraying) for pest and disease control is desirable.

Agricultural soil testing was conducted in the orchard area. Four locations and two depths at each location (approximately 6 inches and 16 inches) were tested. Sample test results are presented in Appendix A. The soil was consistent at each location and is quite suitable for the intended uses. A generalized soil profile is as follows:

A discussion with a local resident indicated that this area of the park had been used historically as personal produce gardens as long ago as the early 1920’s. The area was subsequently used for “Victory Gardens” in the 1940’s and continued in private garden use until the 1970’s when it was reclaimed for a City Park. The resident indicated that the soil was constantly improved by the gardeners and had never received fill soils or dredged spoil materials common to other nearby park areas. The history is consistent with the high quality of soil noted in the test results.

A wide variety of fruit and nut trees were considered. Tree selection parameters were the agricultural growing zone (zone 5A), winter hardiness (to – 20o F) cross pollination requirements, disease resistance, soil conditions, and time of harvest (selected to mature in different months of the growing season).

All trees selected were of a dwarf variety so that harvesting would be relatively easy. Both bare rooted and potted plants were selected.

Table 1 summarizes plant species and characteristics that were planted in the orchard.

* All varieties are dwarf or semi-dwarf unless noted.

Plant locations were laid out on a grid basis considering spacing for proper pollination. A planting hole was dug roughly 2 feet in diameter x 2 feet deep. The base of the hole generally encountered more clayey soils. The pears, Asian pears, plums, raspberries and hazelnuts were received from the nursery as bare-rooted plants. A combination of existing organic soil, purchased soil/compost and wood chips was mixed in approximately equal proportions and used as backfill for these bare rooted plants. A soil acidifier (primarily a sulfur compound) was mixed into the backfill at a rate of approximately 1 pound per plant in order to reduce the pH to approximately 6.0 units. Apples and peaches were received in five-gallon containers. Purchased soil/compost was used as backfill around these plants. Acidifier was not used with the apples and peaches.

Water from heavy recent rains was present in the natural topsoil and filled many of the holes upon excavation. Wood chips were used to raise the surface grade by up to six-inches in the lower portions of the orchard area. The trees were planted as high as possible within the new profile in an attempt to keep the roots above water.

The spaces between the plants were first covered with a layer of cardboard and then wood chips were spread throughout the area. Protective wire cages were placed around the hazelnut, pear, Asian pear, and plum trees.

Materials were sourced from local suppliers and catalog nurseries. Labor was donated by the participating groups, including Northwestern University, NLUG, Edible Evanston, Evanston Township High School, and private individuals. An estimated 420 hours of labor were involved in construction of the Eggleston Orchard. Significant additional hours were spent in planning, design, and purchasing. A summary of general costs is presented in Table 2.

The trees have been watered since installation, either by natural rainfall or hoses. NLUG has a permit to use City water from a hydrant at the west end of the orchard area (approximately 250 to 350 feet from the orchard. NLUG stores the hydrant wrench. NLUG also has an informal agreement with the City and NU to provide long-term maintenance for the orchard. Details of maintenance and harvesting requirements and schedule will be developed. The intent is to maintain an organic orchard and the use of chemical herbicides and pesticides is not allowed.

NLUG will control harvesting of the fruits and nuts when ripe and will be able to sell the produce within the City. The Ecology Center, through their educational programs, will also harvest at times during their classes. Citizens helping themselves from the orchard are discouraged. And, of course, animals and birds will partake of some of the ripe fruit and nuts.

A book and a DVD on developing organic apple orchards and a fruit tree handbook have been given to the Ecology Center for use in developing educational programs. It is also hoped that local garden clubs, schools, and other civic organizations such as Evanston Treekeepers will be able to tour Eggleston Orchard for educational purposes. 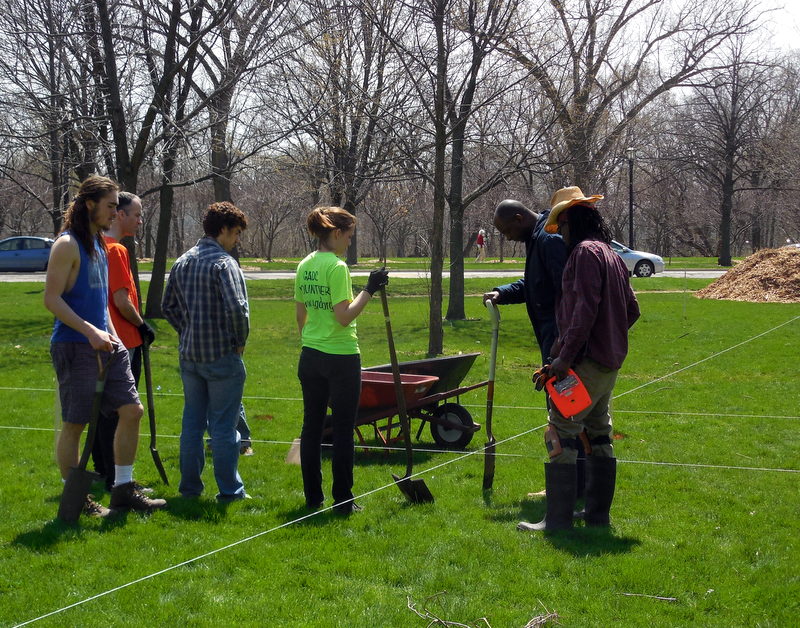 Laying out the orchard grid 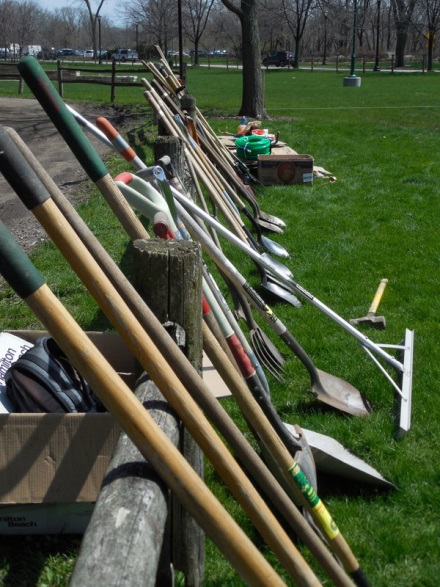 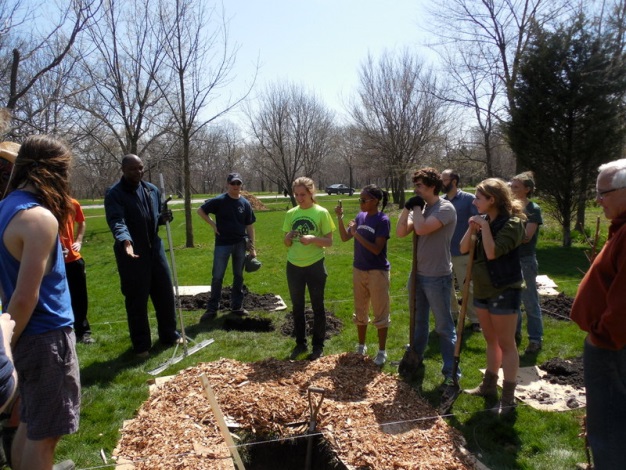 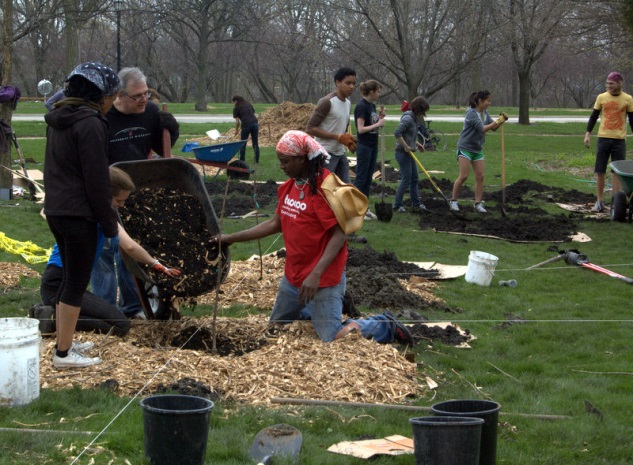 A visit from the Mayor 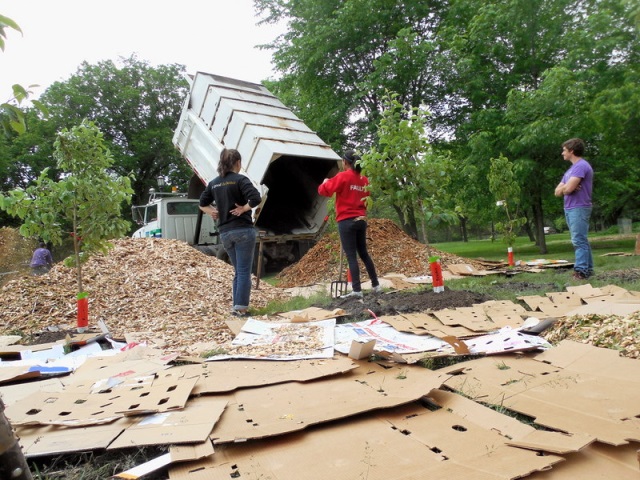 Wood chips and cardboard between the trees 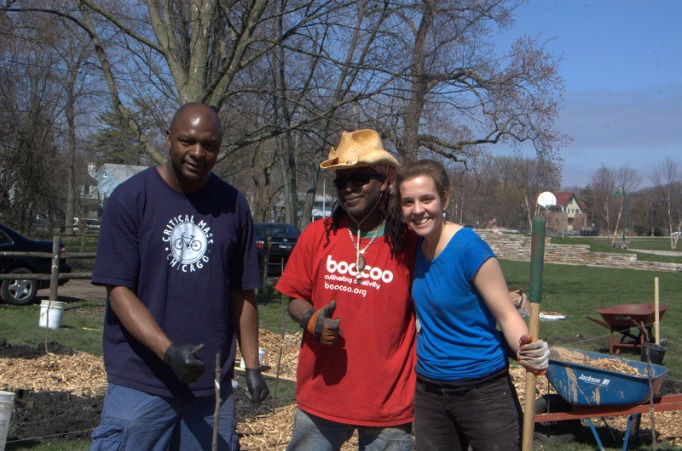 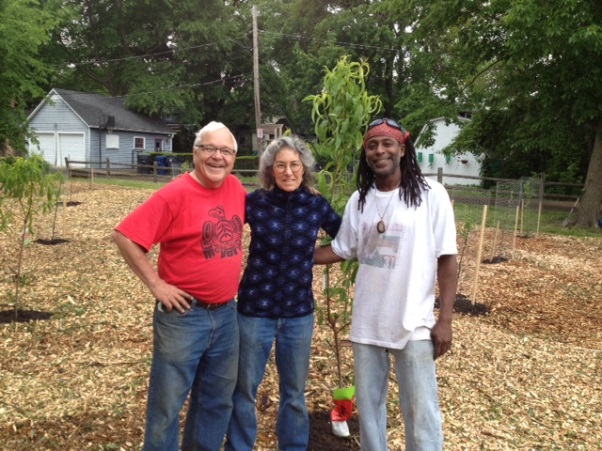 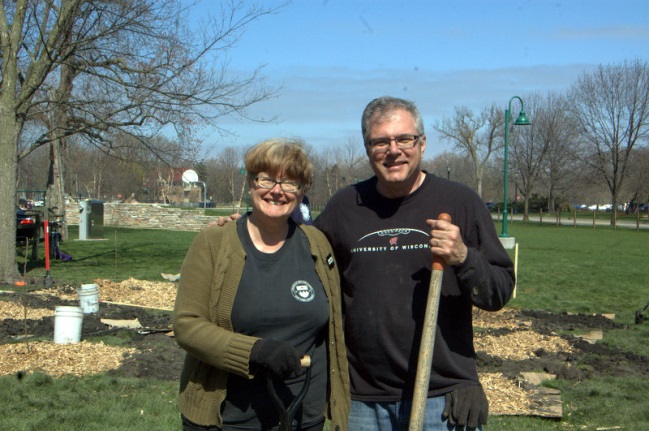 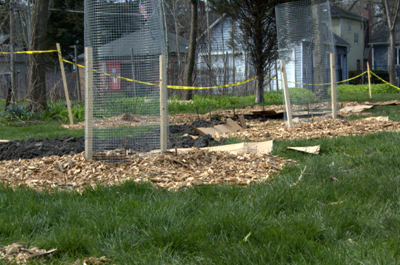 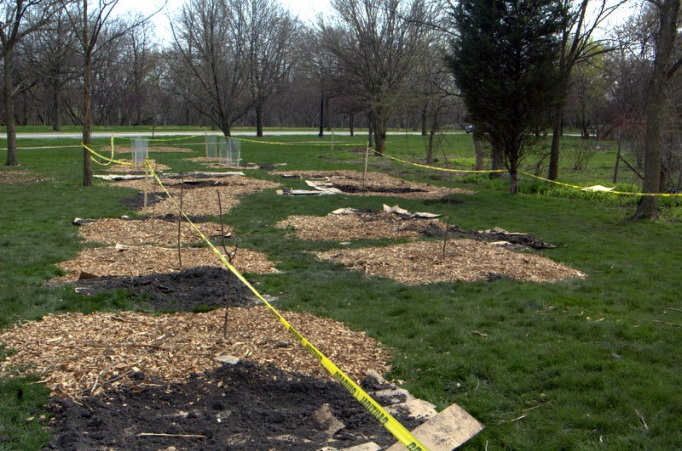 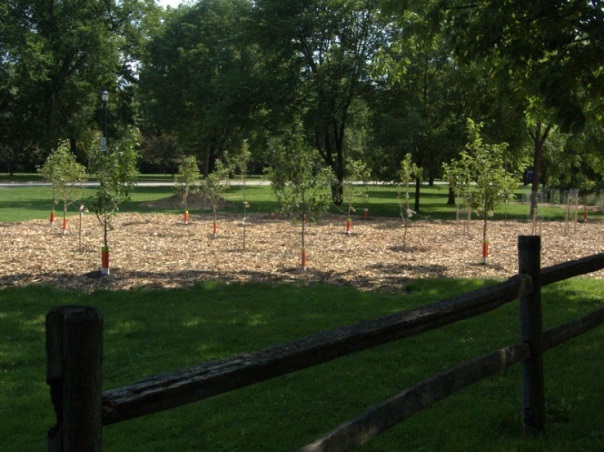 Volunteers wanted and a green thumb is not needed!

Edible Evanston and its associated projects can use your help.

Two waivers are required to participate: one for Edible Evanston, and one for the City of Evanston. You can sign it on-site, but if you are under 18 years old a parent or guardian must sign.

The CGE release is also available here if you prefer to print it and bring a copy with you.

If you have questions, email our volunteer coordinator.

Watch this space for details on all our other opportunities, dates and requirements or contact us.

Individuals working together with supervision to maintain the food forest. REGISTRATION REQUIRED.

Join for an after-work-party! It's a great way to shake off the day. Individuals working together with supervision to maintain the food forest. REGISTRATION REQUIRED.